We met at McBride’s fine Friday night Chinese smorg tonight, with Zev and Sharon and Shelly and Adrien. The occasion was Zev’s impending birthday, and we need to strike while the (smorg) iron is hot.

It was a lovely visit though I had hiccups steadily during the last half of dinner. I had already snarfed down a day’s worth of carbs and calories, but, dammit, I just could not face my usual dessert of jello (this is the only place and occasion I eat jello).

But I did have two glasses of white wine before I was incapacitated for more eating and drinking.

I also decided to pay for a local guy’s smorg … he has done a lot of good for some abandoned and feral cats lately and deserves a break. He was told that I’d paid for his meal and in turn (not that any turn was expected), he told me to stop by and pick up some VEGAN cat food that had been donated to him.

It’s a preposterous notion that a cat would want vegetarian meals … but I told Ben that my chickens would love it.

Earlier in the day, I made this “car” blanket for Zev’s new dog. What do you give to the guy who has everything? … something for his best friend.. 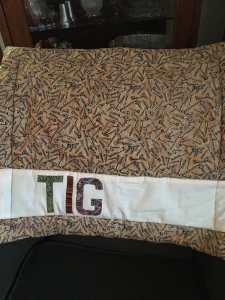 I was on a roll, but a bit out of practice. I used to have a sort of “routine” for making dog blankies, but haven’t made any for awhile. Sometimes I have to concentrate to get the stencilled letters right. 😀

Luckily, I spotted the mistake before I bonded and sewed the letters permanently. I have made those mistakes before.

Daisy is not my grooming client, if you know what I mean, but she is entrusted to my care for the weekend. Fair enough; she is a little sweetie.

At the Pet Hostel, we have Aussie, Sasha, Dusty, Rosie, Dexter &Jazz, Zeke, Daisy, and of course, Max the parrot.

We are getting excited about our new pup, Mica, and I started a blanket for her today. I’ll make one for her mother also.

Maybe I should have another glass of wine … I have had an opened bottle in the fridge for two months. It’s not actually getting better with age.

2 thoughts on “A lovely Friday evening …”