Nope, not a political statement. 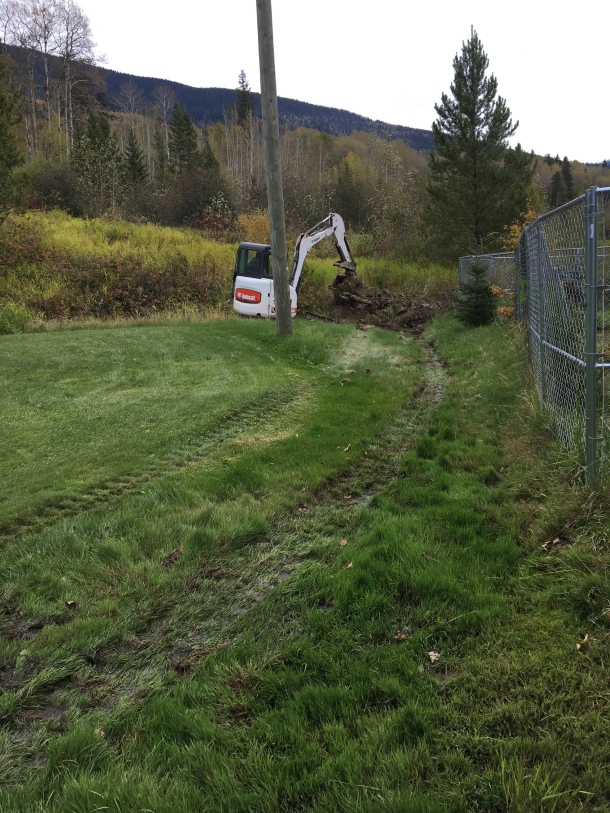 Today Rod, a friend and trusted plumber and expert tradesman-of-all-trades arrived with his midsized excavator and made a drainage ditch deeper.

For many years, our back yard was quite marshy. Before Gary came to live with us, it was actually a wasteland/hayfield, largely ignored. My treasured lawnmower man made it into part of our landscaping, a tidy lawn. Eventually, we got Ray Miller to dig a sizeable trench which meant that the yard dried out earlier after winter.

This year, the yard has stayed spongey in areas that used to be firm, easy to mow, and even “drivable”. We could put or pick up stuff back there, or allow customers with trailers to turn around.

Today has been a good day. I only had one dog grooming task, but I was dreading it. I was told on the phone that an “abused German Shepherd” was extremely difficult for nail clipping, and that was all the owner wanted done.

So the big dog “Sunny” arrived with his anxious owner, and was panting so hard I thought he might turn blue. His owner couldn’t pull Sunny out of the back seat, and accidentally pulled the leash off and fell in the driveway.

Fortunately, the nice woman was not hurt. I helped her to her feet and suggested we try a different method. I crawled in the back seat with the dog, and with the owner on the other side, I got all the nails trimmed. They were very long and hard as horse hooves, but I have the tool for that. Also, I have had considerable practice and some luck.

The dog relaxed and never once tried to bite, so the operation was a success. Sunny is an attractive dog and I wish I had taken his photo. He is welcome back.

During the other hours of the day, I of course had the care of other dogs to attend to. I also cleaned out the greenhouse and have been trying to give the green tomatoes away on the local Facebook Buy and Sell.

I did a modicum of other tidying in the gardens. Gave the frozen sunflower heads to the chickens.

Yesterday seemed steeped in a haze. Much of the day, I was wiping away tears. I felt depressed and was pushing myself to do even the simple things. I tried not to dwell on thoughts of Cinder, nor Davey or Lady or McKenna, nor human beings I have loved and lost. I can’t explain it and wondered if this was going to be the new norm, and if I needed help. It felt like “sinking”. When I thought about the possibility of travelling to see Juno and Linden later, I actually thought, “No way, I feel too sad to drive that far or get on a plane.”

Friends Joan and David and Stefi were witness to this tearfulness, and I hope they weren’t too worried. It does help to talk.

The morose mood is unusual for me, and I’m relieved to say that I awoke feeling better. Life goes on.

This morning I phoned Uncle John. He seemed overjoyed to hear from me. We chattered away for almost an hour. John is youthful for his age … early nineties. He has two siblings left of the eight who lived past infancy: Willard, 101 next week, and Janette, 102.

Uncle John, who lives in a very nice assisted living complex in Paris, Ontario, said that he asks himself, “Why am I even here?”. He said, “Everyone else here is using a walker, a wheelchair or can’t get out of bed at all, and I’m always wondering where to go for a walk!”. My take on this is that all his meals and cleaning are taken care of, so it’s easier than being alone in a big house, and someone has to be the youngster in that establishment. He just laughed.

Anywayyyy … it’s time to do the rounds at the Pet Hostel. Supper is just burritos and Spanish rice tonight. We have a lot of delicious local beef in the freezer … traded for dog boarding!

Duke and Lady are enjoying the big exercise yard.

One thought on “Draining the swamp …”